We believe that Web3 and the move toward digital ownership will fundamentally impact the  games business. Regardless of where you might find yourself during the current debates that surround Web3, you can’t deny that, as game developers, it is imperative that you gain an understanding of what you can do with it, what you will do with it, and how.

Tilting Point is and has always been about amplifying independent developers’ businesses, their live games and their technology, and we believe that blockchain game development and token economics offer incredible possibilities to radically change how players and gamemakers view their relationships with games, benefitting the players, as well as boosting LTV for developers. We intend to help our partners make the most of this opportunity. Web3 strategy is now one of our core strategic pillars.

That’s not to say we are changing who we are. We remain a progressive publisher with a laser focus on accelerating and amplifying the businesses, games and technologies of our partners and internal studios.  What it does mean is that, from this point forward, Web3 will now be one of our main amplifiers, alongside all of our existing amplifiers for which we have the strongest reputation: UA funding and management, organic growth and ad monetization, all the way to co-development with big IPs, and even possible acquisition. Adding Web3 as a main amplifier will offer deeper engagement and retention for all the games we work with.

So what does this mean?  Tilting Point is now a common ground solution for Web2 and Web3 developers, overall amplifying the performance of games. We can bridge games from Web2 to Web3, helping both our existing and new F2P partners expand into Play and Earn, and, with our extensive publishing expertise, we can help native Web3 game companies reach broader audiences. This is a natural extension of what we do as the ideal growth partner for developers.  This also isn’t new territory for us; we first began to incorporate Web3 technology into one of our games more than two years ago.

We are approaching this with a long-term view. We know that Web3 is much more than the tip of the iceberg pulling so much focus right now, causing excitement from some and fear or vitriol from others. We acknowledge that the current experiences out there are lacking, and that Web3 is still very early.  However, we believe that Tilting Point and our expert developers entering this space can and will shape the next generation of Web3 experiences.  They will be better founded in real expertise in retention and monetization, and built to live and entertain for years. That’s why we have already made strategic partnerships with the best teams out there deftly helping build the infrastructure we need to make blockchain games as powerful and positive as they can be.

Ships and character art from ASTROKINGS. Web3 gaming will allow players to mint and trade fully unique assets such as these.

In March, we entered into a partnership with Stardust to offer all of our developer partners and internal studios the tools they need to integrate NFTs quickly and cost-effectively into their games using Stardust’s low-code, blockchain-free API, enabling them to build and scale metaverse-ready experiences for their players. Now, we are excited to be able to reveal our multi-year partnership with Polygon Studios, enabling us to provide our developer partners and internal studios with an efficient and low-cost Web3 platform for them to build and launch their games on the blockchain while ensuring the highest security and lowest carbon footprint.

These partnerships with Polygon Studios and Stardust have enabled us to make a commitment to bring 10 games to Web3 over the next 24 months, the first three of which we can reveal now: ASTROKINGS by masters of the 4x strategy game genre AN Games, who we acquired at the beginning of this year, and The Walking Dead: Casino Slots are both from internal studios of Tilting Point’s. Chess Universe, by our partner developer Kings of Games, will be the first of our third-party games we will bring onto the blockchain.

In the massively multiplayer real-time strategy game ASTROKINGS, players build their own starship fleet, customize it with powerful weapons, and command it either solo or with an alliance team to conquer the galaxy. The Walking Dead: Casino Slots gives players the opportunity to win a staggering number of collectible heroes via virtual Las Vegas-style slot machines. In Chess Universe, players unlock characters and chess boards, earn rewards and gems, and can even get a PET for their achievements, all while learning how to play chess on different levels. While details about how each game will implement Web3 technology will be revealed at later dates, Web3 gaming enables players to claim digital ownership of in-game assets such as skins and characters, as NFTs recorded on the blockchain, as well as trade them via public marketplaces.

This is a thrilling and crucial time for the games industry and particularly for game developers. Tilting Point is here, as we have been for a decade, to ensure developers’ greatest possible success in the ever-evolving market, and we hope you will let us help you capitalize on the Web3 revolution. 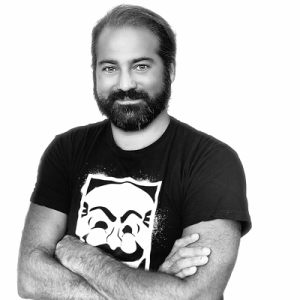 Samir Agili is CEO and President of Tilting Point, an international games publisher which employs over 400 people worldwide. Prior to joining Tilting Point, Samir was the Vice-President of Production for the US and Latin America at Gameloft, where he managed nine development studios across the US and Latin America, and led the development and of over 55 mobile games including Spider-Man Unlimited, Cars: Fast as Lightning, Ice Age Village, The Oregon Trail: American Settler, and Zombiewood. With over 16 years of experience in mobile game development and publishing, Samir is one of the most experienced game makers and leaders of the mobile games industry.

Solving the Mystery Behind Drops in Organic Game Downloads

Addressing Mental Health By & For Community Managers in Gaming