Three Tips for Increasing Engagement and ARPDAU in Live Events

Getting a player’s attention is one thing; keeping it is another thing altogether.

One of the major updates that has kept engagement high in our game Warhammer: Chaos & Conquest was the introduction of what we call Infernal Events. These limited-time events let players from different servers compete and show off their power, while earning valuable in-game rewards. Since we’ve started Infernal Events, the response has been incredible, and we’ve grown the program from five unique event types to ten.

In this blog, I’m going to break down three things that we’ve learned in managing Infernal Events that developers of all shapes and sizes can use to design their own live events.

One of the things that has been instrumental to the success of our Infernal Events was experimenting with the event length.  Events currently only run for two hours, which is enough time for players to jump in and compete, but creates a sense of urgency around participating, since it is a relatively short time window.

We’ve tested out running events that were six, 12, and even 48 hours long, and found the shorter the event, the more urgency players felt around joining.  When players have all day to participate, it is easy to procrastinate instead of jumping in, which can lead to them not joining at all.

Just as the event length can affect engagement, the frequency of events can also have a major impact on the game’s ARPDAU.  In order to maximize revenue we tested different event cadences, adding new events every week for three weeks.

When we first introduced weekend events, our ARPDAU increased 15 percent versus the month prior – this was our baseline for the test. As we began running more events throughout the week, we also decided to run Infernal Events twice per day, to account for our players in different time zones who would otherwise be unable to participate at all.

Here’s what we found:

We were able to strike the right balance between ensuring the events maintained their urgency, while offering players even more chances to engage, which dramatically improved overall player spend.

Tip #3: Tempt the most engaged players with the most meaningful rewards

One of the initial draws of Infernal Events for our players was the prizes.  We used the events to give out popular items with the best value as rewards, and that drove considerable traffic in the first weeks. But players began to lose interest after a couple of months.

To restore that interest, we ran two special double reward events, where players received twice the amount of reward versus our regular events. The response from players was incredible.  We also timed an in-game sale for speed ups that helped players get even more from the event.

And the impact on our ARPDAU was impressive. The events increased our weekend ARPDAU by 143 percent versus the month prior.

While both events had nearly identical levels of engagement, the Infernal Damage Khorne Foe Event which focused on the highest level players and offered the best rewards (including the coveted Legendary Khorne Warlord) delivered 39 percent more ARPDAU than the event targeting all users.

Want to Learn More? Get In Touch.

Live events can be a great way to increase player engagement and ARPDAU. If you’re looking for a partner to help you test your game to deliver better results, the team at Tilting Point is here to help.  Drop us a line at hello@tiltingpoint.com and let’s get started! 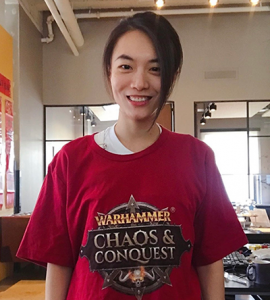 As Associate Product Manager at Tilting Point, Louise is responsible for continuously improving Warhammer and Operation: New Earth on the product side and helping the games reach their monetization potential. Prior to Tilting Point, Louise studied Integrated Marketing and Business Analytics at New York University. In daily life, Louise is keen on collecting Lego and doing puzzles. She’s also a big fan of SLG and RPG mobile games.