Apple Search Ads: How To Maximize The ROI of Your Campaigns

At Tilting Point, we run user acquisition campaigns for games and apps on several networks and Apple Search Ads is one of them. We have been seeing very positive results so far, but we know that some advertisers are still reluctant to allocate some of their campaign budgets to that network.

So, today, we wanted to share some of the techniques we apply to make sure we hit and surpass our ROI (Return on Investment) goals.

Before jumping in, we need to emphasize two key differences between Apple Search Ads and other mobile ad networks.

First, Apple Search Ads uses a Cost-Per-Tap (CPT) model, meaning that advertisers need to pay Apple every time someone “taps” on a Search Ad listing after performing a keyword search. While on other traditional mobile ad networks such as Google UAC or Facebook Ads, the advertiser usually pays per app install (Cost-Per Install model, or CPI) after a user saw or interacted with an ad.

Second, the targeting options offered by Apple are very limited. After selecting which keywords to appear for, you can choose to target users based on their age, device type, new vs. returning and location. That’s great but not a lot compared to the extremely targeted possibilities available on for instance Facebook such as interests, lookalike audiences or retargeting (dynamic ads).

It’s true that people who use search – in general – convert well, but because of these limited targeting options, and the difficulty to know what a user exactly intended with just a search term, it means that Search Ads is very much about controlling your spend to make sure you get the maximum amount of qualified taps and installs. For some of the games we promote, the revenue is higher for users obtained on Search Ads than those from Facebook, but so is the CPI.

So, how should you optimize your Search Ads campaigns for profitability?

The first thing you need to determine is how much you can afford to spend for every Search Ads install, so how much your target CPI (Cost-Per-Install) or Cost-Per-Acquisition (CPA) Goal – as Apple names it – should be. Note the difference in naming here: unlike other networks, Apple uses the word “Acquisition” and not “Install” because they actually only measure when users hit download and not when they have actually fully installed the game (we will hear more on that important difference later in this article).

To do this, if you are already running campaigns on other networks, you know your customer LTV (lifetime value), or how much every user will spend on average in your game.

Let’s say your game net LTV is $6 for iOS users in the United States.

On Apple Search Ads, you can either set your bids based on a Max CPT (Cost-Per-Tap) you are willing to pay or choose a CPA Goal, which means Apple will try to display your ads automatically and maximize conversions. But we don’t recommend that option because, while it will make sure you don’t go above your target CPA, it will limit your impressions quite a lot so you will miss out on several opportunities to convert.

So, for Max CPT, we usually apply a 30% ratio of the LTV of the game we’re promoting, because we normally observe an average 30% conversion rate (from taps to installs) on Search Ads.

In that case, we would be using:

We typically create 4 types of campaigns:

Each campaign is then split into “ad groups” which we use to group sets of keywords that are very close to each other. For example, on our Generic campaigns, we will have a “Pvp shooter” ad group which will include “pvp shooter”, “shooting games pvp”, or “shooting pvp”. Or for our Competitor campaigns, we will create an ad group for each competitor.

This type of very narrow grouping allows you to effectively adjust your bidding and helps you understand which keywords bring the best type of users once you will look into your MMP (Mobile Measurement Partner) reports. 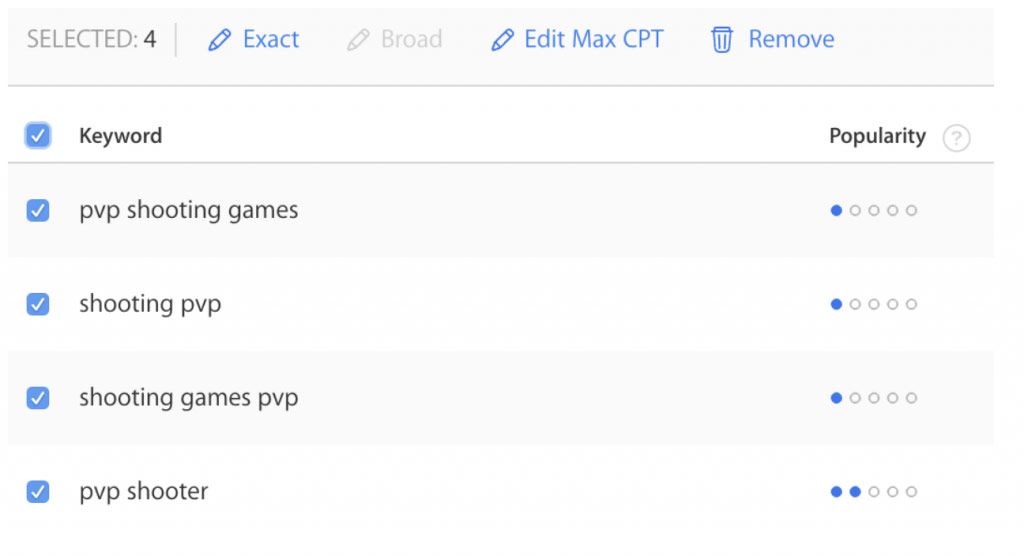 When choosing target keywords, you have two options: Broad Match or Exact Match.

Broad Match is an option that lets Apple decide on which related keywords your app should appear based on their AI. For example if you target “shooter game”, Apple will make your ad appear for “shooter game” but also for other keywords they deem similar, such as “action games” or “brawl stars” (titles in the same or a close category).

While this is a great way to discover new keywords (especially at the start of a campaign), we do not recommend using this type of matching on the long term for your generic campaigns as it really impacts your conversion rates (they can be twice lower than when using an Exact Match setting and thus greatly increase your CPAs).

You should use Broad Match only in your “Discovery” campaigns with a minimal budget. Create ad groups with this setting and once you discover new keywords, add them to your Exact Match ad groups in your Generic campaigns and make sure to then place them in your Broad Match campaign negative keyword lists to avoid duality in your bidding.

There is also another type of keyword targeting feature: Search Match, which basically generates target keywords automatically for you, based on your app’s listing (name, title, keywords, category) and Apple’s AI. This is a feature you should also just use for discovery purposes and with a minimal budget but you should not rely on that for most of your Search Ads strategy.

To maximize the effectiveness of your Search Ads campaigns, make use of the age and gender targeting options offered, especially for your generic campaigns. If you have been running ads for a while already on other networks, you are aware of your LTV and ROAS per demographics. You should then use an ad group for each target demographic. For instance “Story Games-US-Female-18-24” and have another one with the same keywords but for another age group if it has a different kind of monetization “Story Games-US-Female-25-35”. You will then obtain a much finer control of your campaign biddings.

Once you have launched your campaigns, give it a few days and then look at the performance of the ad groups you have created.

On the contrary, for ad groups and keywords that have a high Conversion Rate, for example anything above 30%, you should increase your bid for as long as it’s aligned with your projected ROAS. In order to know how much is necessary, in the Search Ads interface, Apple suggests a bid range to have an indication of how much you should spend to match or beat your competitors. You should adjust your bids for every keyword that are are below the suggested bid ranges (as long as it stays within your target CPA goals). 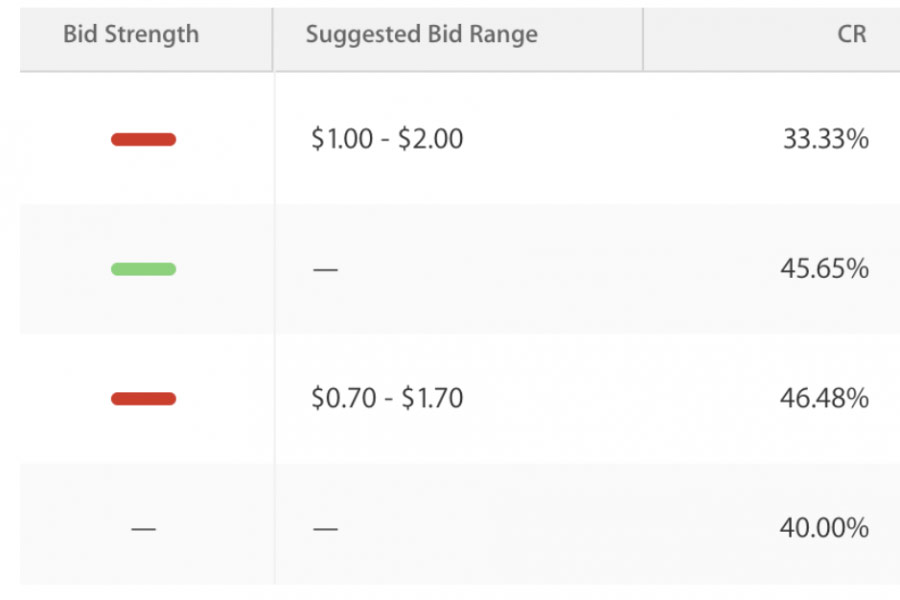 This can be quite time consuming but that’s the most effective way to optimize your campaigns. Over at Tilting Point, we automate this process through a tool we have developed and continuously tweak in order to adjust bids dynamically based on daily performance. 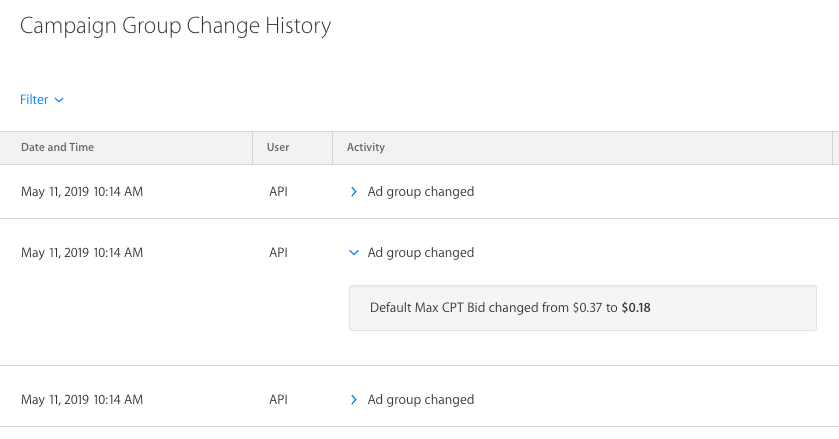 Now comes the most important part: what’s the revenue generated from your Search Ads campaigns?

Apple doesn’t track (or share) any detailed activity coming from the Search Ads installs they have provided you. So you will have to use your MMP for that.

Depending on the LTV curve of your game, you’d be looking at your Day 7, 15, 30 etc. ROAS (Return on Ad Spend) on a campaign, ad group or keyword level.

Let’s say you use Day-7 as a goal, you will then be doing this calculation:

And then compare that your Day-7 ROAS goal. If it’s above that, that’s a good sign and you should keep your campaigns/ad-groups active but make sure you monitor the retention of these users in the long run to validate their good performance.

If it’s below your goal, let’s say by more than 25%, then you should consider pausing or reducing the spend on these ad groups or campaigns.

That’s the formal way of assigning and reporting revenue coming from Search Ads.

But you have to take into consideration the installs that are not seen by your MMP and which may have also generated revenue.

You will always see discrepancies between the number of downloads reported by Apple and the ones reported by your MMP. There are several reasons for that and here are the main ones:

Fortunately, because they don’t want advertisers to go fully blind when running Search Ads campaigns, they are reporting the number of converted users that had LAT on. On the games campaigns we are running, when we don’t apply any targeting options, the LAT rate goes from 5% to 70%. That means that MMPs are not seeing the behaviour of up to 70% of Search Ads installs. Instead, they will be counted in Organic. 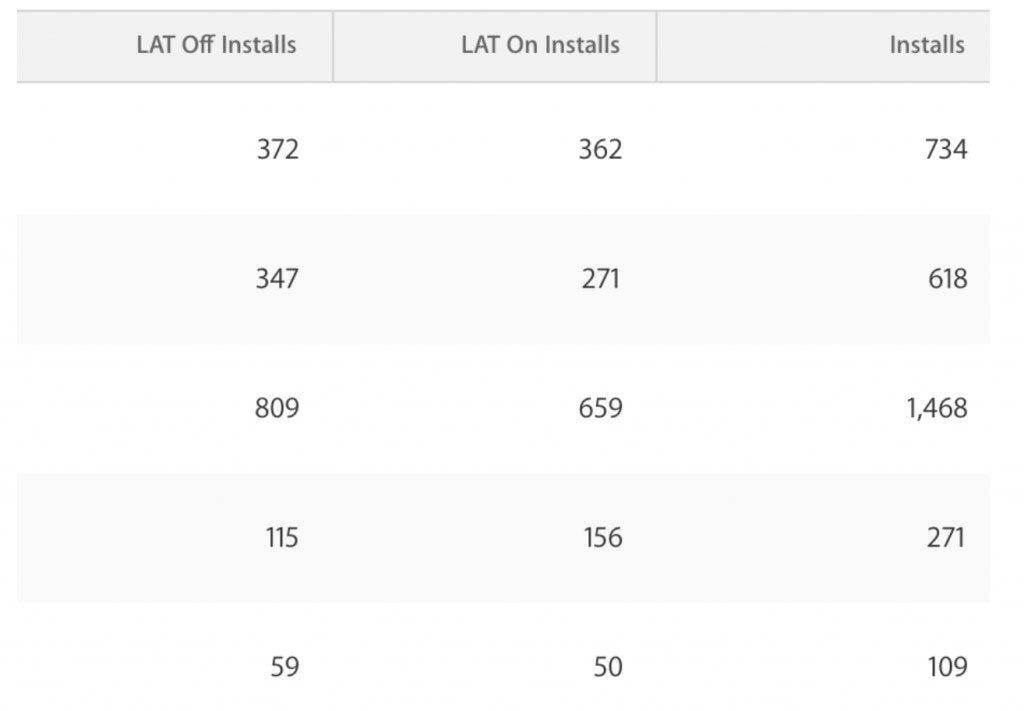 What does that mean for the measurement of your Search Ads profitability? It’s impossible to know if the users having LAT generated the same kind of revenue than those without.

But if you want to make some adjustment to your Search Ads campaigns revenue based on that information, we feel it’s safe to assume that 50% of the LAT users reported by Apple converted the same way than those without (and the other 50% generated nothing).

In that case, you would be doing this kind of calculation for your adjusted ROAS based on the LAT rate:

This will help you in your decision of keeping/pausing a campaign or ad group when you see great Conversion Rates but a ROAS not closely aligned with your goals.